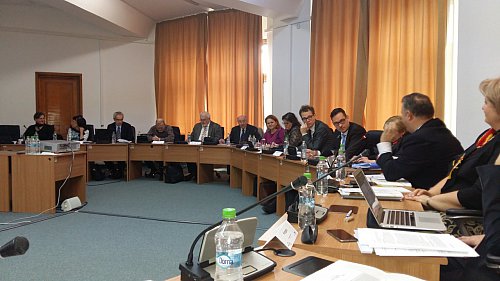 The Priority Area 5 of the EUSDR, responsible for managing environmental risks held its 10th Steering Group Meeting in Bucharest, Romania on the 29th of February 2016.

The event was opened by Ms. Silvia Davidoiu, Romanian National Coordinator of the EUSDR, also by Mr. Frithjof Ehm, representative of the European Commission from DG REGIO, by Mr. Matija Vilfan, Head of the Danube Strategy Point (DSP) and Mr. Gheorghe Constantin representing the Ministry of Environment, Waters and Forests, Romania.

One of the main outcomes of the meeting was the approval of the new, revised Targets of the Priority Area following the short overview of the Actions involving the ICPDR.

During the meeting three projects were introduced to the participants, asking for Letter of Recommendations (LoR) (more projects will be circulated after the meeting for the same purpose). Mr. János Fehér, Head of the GWP CEE Danube Strategy Task Force introduced the DRiDanube – Drought Risk in the Danube Region – project, which received LoR from the PA5 Steering Group at the meeting. A new project proposal initiated by the Hungarian National Directorate General for Disaster Management;Danubius Basic NetWork (DB Network) was presented by Mr. Gábor Till from the Budapest Waterworks.East Avert project – Prevention and protection against floods in the upper Siret and Prut River Basins, through the implementation of a modern monitoring system with automatic stations – was introduced by the Romanian Co-ordination by Ms. Silvia Neamtu.

At the end of the meeting the representatives of the European Commission and of the DSP drew the attention to the fact that the issue of water is going to be the focus of the next EUSDR Annual Forum in November 2016 organized by Slovakia, thus it is a great opportunity for water related Priority Areas such as PA5 (PA4 and PA6) to raise the topic, get political support and underline the achievements of the area.