Close
PrevFlood Survey in Bosnia and Herzegovina01 September 2014Next

Meeting with experts from Bosnia and Herzegovina in Hungary03 December 2014 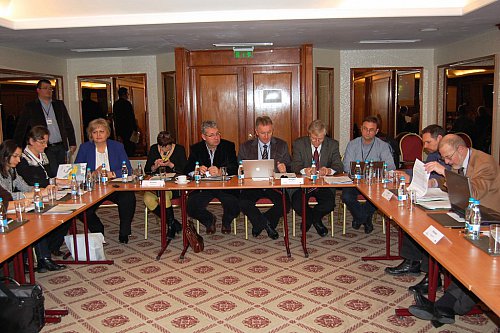 The Priority Area 5, responsible for managing environmental risks held its 8th Steering Group meeting in Bucharest, Romania at the 27th of November 2014. After getting an overview on the last six month’s events, participants had the opportunity to discuss future prospects and plans.

Opening the event, Mrs. Olimpia Negru, Romanian coordinator greeted the participants from the organizer’s side, which was followed by the greeting of the Hungarian coordination through the words of dr. László Dobi. Following the welcome speeches dr. Péter Bakonyi held a presentation about the eventful last half year of the Priority Area. Mr. Ad de Roo – representative of the Joint Research Center (JRC) – informed the participants about the state of the ongoing Water Nexus Program. A new project proposal was made afterwards by the head of the Hungarian Hydrological Forecasting Service at General Directorate of Water Management, Mr. András Csík, under the title of: Towards a better hydrological forecasting performance through more effective data exchange among the Danubian countries. After the break, at the second part of the meeting Ms. Agnes Rajacic – representative of the National Directorate General for Disaster Management – summarized the outcomes of the recently finished flagship project of PA5, the SEERISK project. After having considered all the progress made due to the Action Plan, the two key documents of the PA5 has been discussed, namely The Danube Region Operative Flood Management and Cooperation Program (DR Oper&Cooper); and the Joint Paper on Cooperation and Synergy for the EUSDR Implementation moderated by Mr. László Kóthay, senior advisor of the Priority Area. Finishing the meeting, participants could discuss the final outcomes of the recently closed START project, which was followed by the invitation for the next, 9th SG meeting by the Hungarian coordination, which is – according to the announcement – going to be held at the 7th of May 2015. in Budapest.